“Jack is a “comic’s comic” but knows how to translate that funny brilliance to a crowd, and that is a rare talent.”
— Chili Challis, Former Staff Writer for NBC's 'Tonight Show' and Creative Consultant for MTV/CMT

Merry Christmas and to all my Jewish friends, (3) at last count, Happy Hanukkah! If I left out your Holiday it's probably because most people don't celebrate it and I have no desire to get familiar with it, nor am I going to say "Happy Holidays" or "Seasons Greetings" just to appease you! Unless you celebrate "Festivus," THAT ONE I can get behind ;)

It has been an amazing year, and a bit of a blurr, thousands of miles logged and thousands more to go.  I can't thank those of you who came to the shows enough for your support.  As some of you know I started booking and promoting my own shows in the Midwest and out West and while I had to learn a few things and make some adjustments, all in all it has been the BEST decision I ever made, taking my act directly to the people and having an audience who is actually coming to see me and my fellow comics has been very gratifiying and I thank you! I could not pull any of this off without my lovely and talented website designer/graphic artist Lori Dawson. Lori, you are the best at what you do and I am so thankful for your talents, thank you!

I am very pleased to announce that on November 20th I signed with the Rivertown Entertainment Group.  Steve Brechting and Ben Shawa are well respected entrepreneur's, event promoters,  and successful business owners. I am confident that Rivertown will take my career to new heights in the upcoming months, in fact many exciting things are in the works that I will be able to tell you about as soon as they are confirmed. It is difficult to find representation that one: has juice, and two: you can trust! I have found both in these guys and am proud to also call them my friends.

I am also very thankful to Len Kure and all those at Heffron Talent/Comedy Zone for their support and keeping me working steadily on the road in 2010 and into 2011.  I have met some amazing and talented people this past year and I am sure I am a better entertainer for having shared the stage with many of you.  It is always nice to cross paths on the road with old friends, we all tour so much it is rare to maintain any regular time with what we do, but at least it is quality time ;)

I am most thankful for my crazy family! I love all of you and wish I could see you all more than I do. To my Dad, you are the best! I drew a much better hand than you did having me as a Son, and that makes me even more thankful for all your support and belief in me all these crazy years, I hope I give you less reason to worry these days.  My cousin Lisa for the warm bed and meals when I had nothing and needed a place to crash between gigs, I appreciate you more than you know. My Sister, Brother in Law, Nieces & Nephews and now Great Nieces and Nephews you are all much appreciated and I am happy we have been able to spend more time together lately.

Thank you to all my friends old and new.  My partner in crime Jeff Worley, I am honored to be in the crazy cast of characters that you call friends, you are a pretty crazy character yourself! I look forward to all the adventures that lie ahead, it's never boring! There are too many people to list so just know when I say thank you, yeah, I mean you too!

Three amazing things happened to me in Sturgis S.D. during Bike Week this year and none were drug related! Lol  I witnessed one of my buds get shot out of a cannon, I saw Guns N F'n Roses, and I met Brandee, and I am thankful for that everyday, and miss you everyday and count the days til I can see you again.

Merry Christmas everyone! See ya out there ;)

"Service to others is the rent you pay for your room here on earth."- Muhammad Ali- (September 11th Hope For The Warriors Benefit W/ Chili Challis & Jack Warren)

I have been wrestling with what am I supposed to do with this whole comedy thing for quite some time. I hit the road hard the first part of this year working the clubs, some of them doing 7-9 shows from a Wed to Sun and by the time I did the math I was paid very little $$$ per show for something that took me 9, almost 10 yrs to write.  I know what I do has more value than that ;) so I decided it is time to place all my chips on me and see what happens. I will continue to work for the people (bookers) & clubs who have treated me fairly, who have been in my corner and provide places for comedians to hone their craft, people who are not just business owners but fans of great comedy.
I have made some other changes in how I conduct my life as well, I stopped trying to live life on the road like I am Keith Richards or a member of a rock band touring in the 80's!  That doesn't mean I "found religion" , I just finally realized I function better without a certain substance in my life. I hate that I even have to write about that, but some people will always talk and it is better to get out in front of things, cut it off at the pass ;)

I finished my second comedy tour in Kuwait/Iraq this past June. It changes you when you see young men and women making sacrifices that I could not possibly convey to you in print. It is tough over there! I met a group of guys who are part of "Operation Proper Exit" who are helping and mentoring other soldiers who have lost limbs, severely burned, and those who suffer from PTSD, soldiers who are still sacrificing to help others after they have given so much.  I came home with a new appreciation for what I have, and a determination to try and make things better here at home, the question was just how do I do that ?

Here is what I came up with:

From now on the shows I self-produce, meaning, shows where I find the venue, round up the other talent, & with the help of my supporters, produce the promotional media. I will donate a portion of ALL my ticket sales to a reputable, deserving charity. This isn't a "publicity stunt" or "gimmick", it is what I feel compelled to do and will continue to do for as long as I perform Stand-Up.  I feel good about it, and it helps keep my mind off of me in an incredibly self-absorbed business & stay on the "right" path.

The first of these events will be on September 11th @ The Riviera Theater in Three Rivers Michigan to benefit Hope For The Warriors.  I can't thank my good friend and fellow comedian Chili Challis enough for jumping right in and Headlining this event. Chili is one of the "good guys", the "real deal" as we say in the business and I am honored to once again be sharing the stage with him. I am also humbled to have my friend Andy Butterworth hosting. Andy and I met in Baghdad, I was there telling jokes, he was there as part of Operation Proper Exit, we became fast friends who both missed cold beer (can't drink in Iraq), motorcycles and pretty women who aren't wrapped in Burka's! It is going to be an amazing show!


So that's it! I thank you for reading and if you own a theater or bar, or have a stage, I would love to bring one of these events to your city, town, or village. I guarantee you will enjoy one of the funniest nights of your life and do something good at the same time and I think that is pretty damn cool! 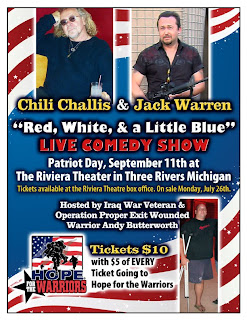 I first want to welcome you to my new website, I hope you enjoy your visit and are able to get an idea of what I do, and who I am ;) If some of the religious overtones mixed in with scantily clad angels and devils and my love affair with all things Rock N' Roll confuses you, it shouldn't, I am like everyone, I think ? I have been Married and Divorced, Addicted and not so Addicted, I have been a construction worker, mechanic, auto body man, retail sales Manager and more........ Like the great Rodney Dangerfield used to say "I'm every man".

I struggle with that inner voice (that angel and devil) on each shoulder that whispers, and sometimes shouts in my ear what to do. I think it is obvious which voice I listen to the most ;) I am just being honest about the fact that I am a work in progress, sometimes a train wreck in progress! Check back often, I will be updating the site frequently!


Life is one helluva ride!
Stay tuned, and again thanks for stopping by ;)
— Jack
No comments:

Visit the website of stand up comedian, Jack Warren:

Jack
Jack Warren was raised in Grand Junction Michigan. A painfully small farm town outside of Kalamazoo, by devout Catholic parents who ran a group foster home for delinquent teens. Jack says with an upbringing like that he had two-career choices: serial killer or stand-up comedian. Now, thanks to the traveling he does while on tour, he gets to do both!